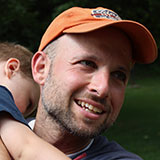 Dave is a freelance journalist who has contributed hundreds of articles to HowStuffWorks since 2007, with a specialty in personal finance, economics and business. Raised in Pittsburgh, Pennsylvania, he attended Duke University where he earned the B.A. in comparative religious studies that has served him so well.

Dave began freelancing when he and his wife moved to Mexico in 2003, publishing articles about Mexican food and culture in The New York Times, the Los Angeles Times and Newsweek. Nearly 15 years and three kids later, Dave and his family recently moved back to Mexico and just might stay a while.

Who Was the Mysterious Melchizedek in the Bible?

He makes just one brief appearance in Genesis, yet he's been seen as a precursor of Jesus Christ. What was he really and how did he become associated with Jesus?

Every month, the U.S. Bureau of Labor Statistics releases a report that looks at the unemployment rate, among other job-related data in the country. But who counts as "unemployed" can be tricky.

How Robert the Bruce, Inspired by a Spider, Won Scottish Independence

Brazenly ambitious, he became king of Scotland and won independence from the despised English to become a legendary figure of Scottish national pride.

Why Were the Pharisees the 'Bad Guys' in the Bible?

The New Testament is full of tense exchanges between Jesus and the Pharisees, who often tried to trip him up in legalistic debates. But who were the Pharisees really and what did they believe?

The phrase "systemic racism" has become very widespread in the U.S. in the past year or so, but what does it really mean?

Sikhism Explained: What to Know About This Often-Misunderstood Religion

‌It's one of the largest religions on Earth but little-known in the West, where its practitioners are often mistaken for Muslims or Hindus. What else should we know about the Sikh faith?

Where Should You Put Your Money When Inflation Is High?

The BLS Report that showed a 4.2 percent inflation rate for April had many people wondering if a period of high inflation was coming. Here are some smart money moves to make if it does happen.

What's a Mezuzah and What's Inside the Case?

Many Jewish people will affix a mezuzah, a decorative case, to the doorframe of their houses. What's the significance of this?

Lao-tzu was the legendary Taoist philosopher whose words sound profoundly modern. They help us maintain a sense of harmony in an often-chaotic world. Here are five of his sayings to ponder.

Who Were the Nephilim, the Bible's Mysterious Race of Giants?

An obscure passage in Genesis mentions a group of superhumans who were the offspring of angels and women. Why was this included and what does that have to do with the Watchers?

It takes a lot of brass to pull off chutzpah successfully. What does the word mean and what separates it from mere impudence?

Cain and Abel are depicted in the Bible as the first pair of brothers and also the first case of murder on Earth. But what does the story really mean?

The History of Lilith, From Demon to Adam's First Wife to Feminist Icon

The black-haired "demoness" of folklore turns up in the legends of many ancient cultures but in the 20th century she has been recast as a feminist symbol. This is her story.

Chinese philosopher Confucius tutored many young men on ethical behavior. Here are five of his quotes about personal morals and good government that we can still learn from.

Is Jainism the World's Most Peaceful Religion?

Nonviolence is central to the core of Jainism, as everything has a soul – animals, flowers and even bacteria, as well as people. How do Jainists practice this in daily life?

What Is the Serenity Prayer and Who Wrote It?

This short four-line prayer is one of the best-known in the world. But who wrote it and how did it come to be associated with AA?

Ever heard anyone say, "He swears like a sailor"? Why do sailors get singled out for being extra-profane? Because there's a long, colorful history behind it.

Which Native American Nations Are the 'Five Civilized Tribes'?

In the 19th century, five Native American nations were given this title by the U.S. government because they adopted some of the practices of European Americans. Who were these tribes and what happened to them?

Gender-neutral names are becoming more popular for children. We have a great list for you to check out.

Why We Love Henry David Thoreau, in 5 Quotes

We may think of Thoreau as the Walden Pond hermit who penned profound books on nature and philosophy. But he was also funny and sociable and valued his friends deeply. What can we learn from some of his best quotes?