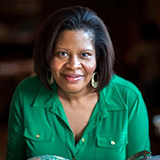 Shaun Chavis is a freelance writer specializing in food issues. She has a bachelor’s degree in journalism, a culinary arts degree, and master’s degree in gastronomy from Boston University. She’s worked as a newscast producer and online news producer for television stations in Oklahoma City, Durham and Boston. She wrote an award-winning weight loss blog as a diet editor for Health magazine, and edited cookbooks for Cooking Light, Southern Living, and other brands. Shaun grew up the daughter of a U.S. Army officer and still loves travel. She currently lives in Atlanta, Georgia.

How to Deep Fry a Turkey

Deep frying a turkey can be risky business. But if you know how to do it right, you'll be rewarded with a succulent and juicy result you simply can't get from roasting.

10 Creative Ways to Use Banana Peppers

Do you have a bushel of banana peppers from your garden, and nothing to do with them? Never fear. We have ways to use them all.

Phallus Impudicus: The Nastiest Mushroom Ever?

Don't be alarmed if you find a few of these funky mushrooms popping up in your yard right when the weather turns cool and wet.

5 Ways to Use Fresh Cranberries

Fresh cranberries are a sign that the holidays are in full swing. But what are some simple ways to utilize with this tiny tart fruit?

Your Sushi May Not Be as Healthy as You Think

Fresh fish can pack a punch in the good nutrients department. But when it comes to sushi, that punch can be good or bad, and it all depends on what you order.

Is Juice Really Better for You Than Soda?

Unless it's fresh-squeezed (and even then) juice is loaded with sugar, often as much as a can of Coca-Cola. So why do we still tout it as healthy?

8 Awesome Uses for Your Instant Pot

Instant Pot is all the rage. But what's the big deal? What makes this pressure cooker so great?

Why Are Certain Foods Eaten Mainly at Breakfast?

Americans have come to expect certain foods for breakfast. But why did these particular foods end up as morning meals?

Canned foods are super convenient, but there's often a stigma attached to serving them. Is that warranted?

Is Raw Milk Better For You Than Pasteurized Milk?

Raw milk is actually blamed for foodborne illnesses across the United States, and it's illegal to sell in several. But is it really warranted?

Your Yogurt Is Probably Loaded With Sugar

Your favorite yogurt could have more sugar than a 12-ounce can of soda. So, is it even healthy?

Is the Carolina Reaper the World's Hottest Pepper?

Peppers are getting hotter these days. But which one is the hottest of them all? And why do we keep searching for ever-hotter peppers?

The Quest to Fix the Grocery Store Tomato

Grocery store tomatoes are all but flavorless anymore. A group of scientists is out to bring the ripe, red taste of summer back.

The Keto Craze: Does the Diet Live Up to the Hype?

The keto diet is high in fat and low in carbs — ideal for quick weight loss, but not necessarily for keeping it off.

All Salt Is Not the Same

Salt is something most of us use without thinking about it. But with so many options available, how do we know what's best?

The Humble History of Pumpkin Pie

It's a pie. Filled with squash. Who in the world decided that was a good idea?

Craving some sugary sweet cotton candy? Then reach for these grapes instead. You'll be shocked at how much they taste just like the spun stuff.

Does Caffeine Increase — or Decrease — Appetite?

Nothing goes better with a cup of coffee than a sweet cupcake. But do you crave the two together or does that cup of joe actually make you hungry?

Why Is Lobster So Expensive, and Will it Stay That Way?

Lobster has long been associated with luxury and fine dining. But could newly imposed Chinese tariffs change that?

The Light and Fluffy History of Southern Biscuits

And a simple biscuit recipe to go along with it.

Water Is Free. Why Do Americans Spend Billions on the Bottled Stuff?

In 2017, bottled water surpassed soda as Americans' favorite drink. How did water, something we get for free, become a multi-billion-dollar business?

The number of Americans living in food deserts has decreased, but there's still a long way to go before everyone has access to healthy food.

How Salmonella Can Wind Up in Your Breakfast Cereal

Sure you can get salmonella from eating contaminated produce or meat, but your beloved breakfast cereal? Really?

Is Lectin-free the New Gluten-free?

A lectin-free diet bans beans, grains and even some veggies. So is this the next cure-all fad diet?