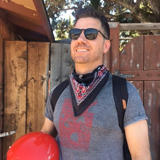 Chris Opfer has written about everything from genetically-modified rats on the Galapagos Islands to Middle Eastern barbers who use homemade flame throwers to cut hair. His work has also appeared in The Atlantic, The Village Voice, New York Magazine, Pacific Standard and American Way, among other publications. Chris is a graduate of James Madison University and currently based in New York City.

Should You Turn Your Heat Down When You're Not Home?

As you leave home on a winter morning, you may wonder whether to turn off your heat, turn it down or let it maintain a cozy temperature. Which will save the most energy and money? The answer might surprise you.

10 Historical Untruths About the First Thanksgiving

Does Your Body Really Replace Itself Every Seven Years?

Your body replaces billions (with a b!) of cells every day. In about 100 days, 30 trillion be replaced, but does that mean you're a new person, too?

10 Ways a Survival Bracelet Can Save Your Life

It may not look like much, but this little piece of wristwear is very useful in a bind. Unlike other jewelry, it can help you get dinner, stop blood or make a shelter.

Maybe you could care less about grammar. After all, it's a doggy-dog world? No. That might sound right, but it's one of 10 common phrases people say wrong.

10 Threats You Should Never Try to Outrun

Fight or flight aren't the only possible responses to an emergency situation. Flight can actually sometimes make the problem worse. When is trying to run a really bad idea?

What's the difference between a semi-automatic weapon and a machine gun?

The term "semi-automatic weapon" is used in the U.S. media often. But what does it really mean? Is it just another term for a machine gun?

Who's the worst in the restroom? The person who drips on the seat, talks on the phone or hogs the mirror? We put all three – and some others – on our list of annoyances.

Jackie Robinson is rightfully lauded for breaking Major League Baseball's color barrier in 1947. But there were many unsung players who paved the way for Robinson's momentous breakthrough.

What If the Yellowstone Supervolcano Erupted?

Welcome to Yellowstone, a natural wonderland that's home to stunning vistas, vibrant plant and animal life ... and a massive and potentially devastating supervolcano.

What If Earth's Core Cooled Down?

The core of our planet is about as hot as the sun. Could it ever cool down? That's one thing you don't want to happen.

Is April the Most Violent Month?

Baseball, taxes and unconscionable acts of mass violence. That's what April has been all about in recent decades. Are there really more acts of terrorism in April and if so, why?

With all the Internet spying going on out there, it seems like it would be easy to know who's viewing your Facebook profile. Lots of apps promise they can, but can they really?

So maybe you don't have a great credit history, or you're having trouble coming up with a down payment. Renting to own is one way to become a homeowner -- but it has its pitfalls.

If you're contracted to work for a company, the money you receive is called "nonemployee compensation." You might just call it cash. Why does the name matter?

15 Worst Hurricanes of All Time

The Americas have been hit with some major hurricanes throughout the decades. But which were the worst ones in history?

The oceans are rising, and they're threatening to take down some of the world's brightest cultural gems. Here are 10 of the most notable spots endangered by climate change.

These destinations are definitely for folks drawn to the dark side of life.

Not only do bug zappers mostly kill beneficial insects, they also can serve you up a side of bacteria with your burger.

What If the Amazon Rainforest Is Completely Destroyed?

Climate change and industrial activity are wiping out large sections of the world's largest rainforest.

The Mysterious Disappearance of Ambrose Bierce

Literary heavyweight Ambrose Bierce mysteriously disappeared in 1914 leaving behind a trail of myths and legends, but little evidence as to his fate.

There's a fascinating story behind how punk, both the music and the cultural movement, spanned the globe, becoming way more than just a sound and a mohawk.

The Electric Guitar Made for Women Rockers

St. Vincent, one of indie rock's female pioneers, helped design a guitar that some say is a perfect female fit.

Marijuana Edibles: Not Such a Treat

A new study offers some insight into the possible health effects of edible marijuana.

Henry Ford vs. the Dodge Brothers: An All-American Feud

John and Horace Dodge were early investors in the Ford Motor Company, but the relationship quickly devolved into the feud of a lifetime.