How an Ice Hotel Works 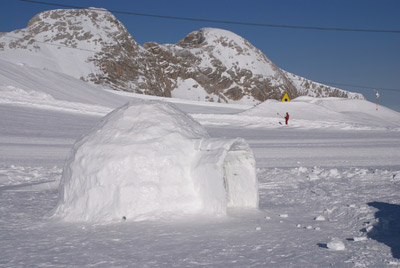 Ice hotels have their roots in igloo design.
Andrew Buckin/Dreamstime.com

Ice hotels are the elaborate, commercial descendants of igloos. Canadian and Greenland Inuit made the simple dwellings as temporary winter homes on hunting grounds. An experienced Inuit can build an igloo in only about one or two hours.

A person constructing an igloo cuts blocks of compact snow from deep drifts with a snow knife made from bone or metal. The blocks are large -- about 2 feet by 4 feet and 8 inches thick. The builder lays out the first row of blocks in a circle then shaves the top surface to form a sloping spiral. The layers gradually taper in until they form a dome with a small hole left for ventilation.

Igloos have a few other simple architectural details. A narrow passageway leads into the igloo and stores supplies, a sealskin flap keeps out drafts, and a window made from a sheet of ice or seal intestine lets in light. Igloos also have pans for burning seal blubber and snow beds covered in twigs and furs.

­Ice construction became less practical and more fantastical in 1955 when the Ice Palace made its debut at Quebec's Bonhomme, or Winter Carnival. The pre-Lent festival is the third-largest in the world after Rio de Janeiro and New Orleans. It boasts an enormous castle made from snow and ice and its design ranges in style from Disney-like turrets to illuminated onion domes worthy of St. Basil's Cathedral.

With its snowy history, it's natural that Quebec would also have an impressive ice hotel. In 1996, the ice-structure enthusiast Jacques Debois found out about the Swedish ICEHOTEL. He had already built igloos and ice buildings for festivals around Canada but had not considered an ice lodging. He soon opened the Ice Hotel Quebec-Canada in Sainte-Catherine-de-la-Jacques-Cartier about 30 minutes outside of Quebec City.

The hotel operates on the grounds of the Station Touristique Duchesnay, a resort for snowmobiling, dog sledding, cross-country skiing, ice-fishing and ice skating. The hotel grows nearly every year -- it has 36 rooms and themed suites, an ice chapel, galleries and a bar. Like its Swedish counterpart, Ice Hotel Quebec-Canada also gives public tours during the day.

To learn more about ice hotels, snow and destination hotels, check out the links below.­

Ice Hotels and the Environment

Although ICEHOTEL draws its water from the River Torne and uses geothermal energy for its electricity, not all ice hotels are environmentally friendly. Some even use electricity to make their ice. Ice bars have also made their way well outside of the Arctic Circle. The Absolut Vodka ICEHOTEL collaboration has extended to Stockholm, Milan, London, Tokyo, Copenhagen and Shanghai, where, despite the distance and warmer temperature, they still import ice from the Torne.

10 Foods to Buy by the Side of the Road

Top 5 Most Dangerous Roads in the World